A sharp rejection of resistance above $9k was not entirely unexpected. Bitcoin price has been poised to pass this level for the best part of the week. When it did, an instant fake out occurred and crypto prices plunged back a thousand dollars in a matter of hours.

The move sent $25 billion out of digital assets and back into fiat as fears of a bigger correction mounted. Total market capitalization reached a new 2019 high of $285 billion when BTC made its move above $9k. From there it was smashed almost 10 percent in a couple of hours plunging back below $260 billion. 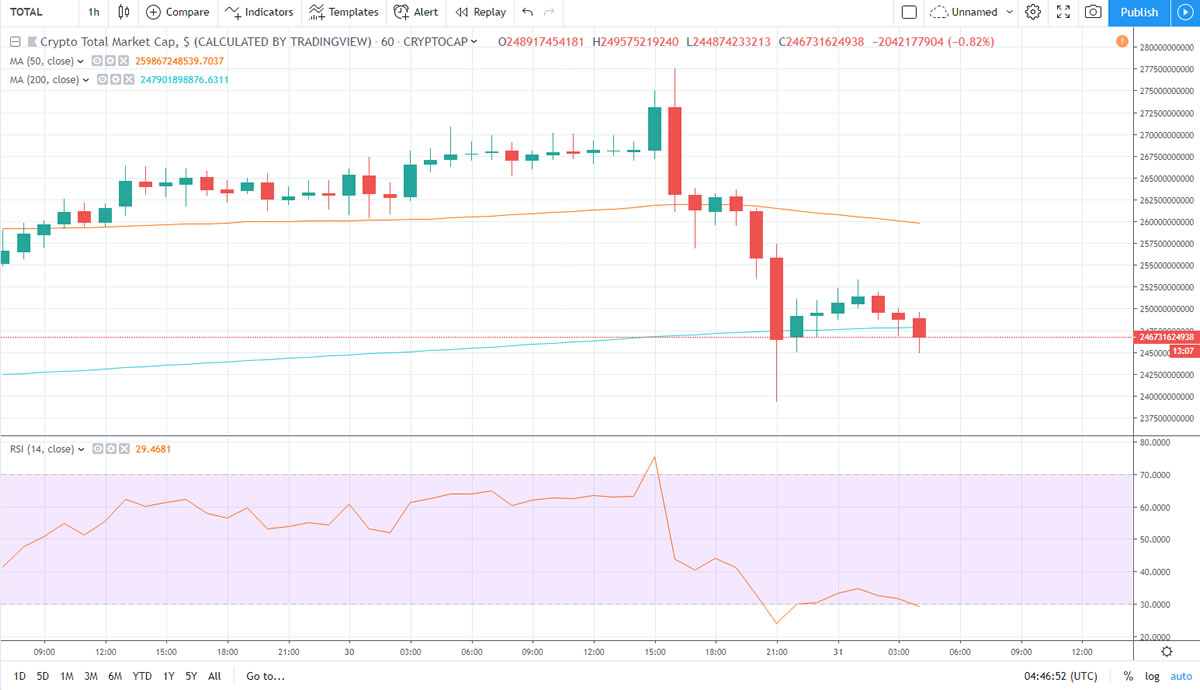 As usual the altcoins have been hit the hardest. Most of them are still hopelessly coupled to bitcoin, so much that when it gets a cut, they hemorrhage. Many were dumping double digits during Asian trading today. Bitcoin SV, following its fake pump yesterday, shed 20 percent while Bitcoin Diamond lost 18 percent.

Ethereum 00 fell back to $250 in a 10 percent slide and Bitcoin Cash dropped to $420 after losing a similar amount. The rest of the altcoins are in pain at the moment as all gains over the past couple of days get wiped out.

Looking at the bigger picture, a market cap of $260 billion is still up 7 percent on the week, 54 percent on the month and over a hundred percent since the beginning of the year. May has been the brightest month for crypto for a long time so this movement is pretty minor in the grand scheme of things.

There have been many calls for a pullback of this magnitude recently. After all, it has happened eight times during the last uptrend.

If this is the beginning, BTC/USD will return to $6k before hitting support and stabilizing. Analysts are still of mixed opinion as to whether this will actually occur or not. Trader Josh Rager tweeted:

$BTC pullback came before the level everyone was expecting … Majority have been front run all year and this is another case. Could still bounce from low $8ks to $9k+ but would like to see a daily close above $8200. Bulls stepping in.

$BTC pullback came before the level everyone was expecting

At the time of writing Bitcoin had stabilized above $8,200 after dropping over ten percent in a few hours yesterday. A fall below $8k could see things turn south pretty quickly with the next major support level lying around the $7,400 zone. Dropping below that will be in the 30 percent territory, which is likely to lead to mass accumulation around $6,000.

Overall, corrections are natural so market movements over the past 24 hours should not cause concern. The crypto winter is definitely over and the term ‘buy the dip’ is now on everyone’s lips.

Will Bitcoin hold above $8k or is the 30% correction inbound? Add your thoughts below